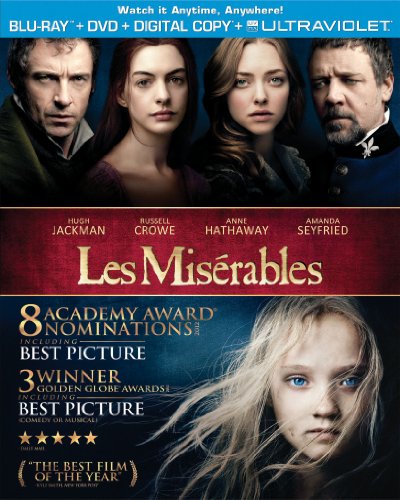 Own on Blu-Ray(TM) Combo Pack Including DVD, Digital Copy & UltraViolet(TM)

has been seen by more than 60 million people in 42 countries around the globe. Now the motion picture adaptation that grossed more than $340 million worldwide arrives on Blu-ray(TM) Combo Pack, DVD and On Demand on March 22, 2013, from Universal Studios Home Entertainment. Critically acclaimed and star-studded, Les Misérables

is a stunningly realized interpretation of Victor Hugo's epic tale of broken dreams, passion, sacrifice and redemption - a timeless testament to the endurance of the human spirit. This Golden Globe(R)-winning cinematic event can now be experienced over and over again on Blu-ray(TM) Combo Pack and DVD with more than an hour of bonus features including cast interviews. Additionally, the Blu-ray(TM) Combo Pack is loaded with an extra 45 minutes of exclusive content taking viewers behind the scenes of the groundbreaking production for an unmatched entertainment experience.

Compelling and poignant, Les Misérables has earned kudos from critics around the world, including Vogue's Adam Green, who describes it as "a spectacular achievement" and Deadline.com's Pete Hammond, who calls it "remarkably entertaining and powerful" and praises its "stunning imagery and performance." Les Misérables dominated the 2013 awards season, garnering eight Academy Award(R) nominations, including Best Picture, Best Actor and Best Supporting Actress, and sweeping the Golden Globes with awards for Jackman, and Hathaway, as well as the prize for Best Motion Picture - Musical or Comedy.
The Blu-ray(TM) Combo Pack allows consumers to view Les Misérables anytime, anywhere on the platform of their choice. It includes a Blu-ray(TM) disc, a DVD, a Digital Copy and UltraViolet(TM) for the ultimate, complete viewing experience.

* Blu-ray(TM) disc unleashes the power of your HDTV and is the best way to watch movies at home, featuring perfect hi-def picture and hi-def sound.
* DVD offers the flexibility and convenience of playing movies in more places, both at home and away.
* Digital Copy provides consumers with a choice of formats from a variety of partners, including options to watch on iPhone(R), Android(TM), computers and more.
* UltraViolet(TM) is a revolutionary new way for consumers to collect their movies and TV shows in the cloud. UltraViolet(TM) lets consumers instantly stream and download to tablets, smartphones, computers and TVs. Now available in both the United States and Canada.
Bonus Features Exclusive to the Blu-rayTM
* Les Misérables Singing Live: The star-studded cast and production team discuss how the daunting challenge of singing live rather than lip-syncing to pre-recorded tracks ultimately gave them the creative freedom to deliver nuanced, emotionally powerful performances.
* Battle at the Barricade: Director Tom Hooper wanted the dramatic building of the barricade to be as visceral and intense as possible, so he had his actors build it in real time, literally hurling furniture out of windows to construct an actual barricade. This featurette takes an in-depth look at the creation and filming of all the action on this remarkable set.
* The West End Connection: Meet the "godfather" of the original stage production of Les Misérables, renowned West End producer Cameron Mackintosh, who was deeply involved in the filming, as well as former Les Misérables, theatrical stars who were thrilled to appear in supporting roles in the current film.
* Les Misérables on Location: Filming rather than staging Les Misérables presents the opportunity to shoot in real world locations: a massive dry dock on the coast of England, a beautiful underground chapel in the heart of London and the ancient city of Winchester. Members of the cast and crew talk about what it was like to find and work in these incredible locations.

Bonus Features on Both the Blu-rayTM and DVD
* The Stars of Les Misérables: Director Tom Hooper talks about casting the iconic characters, and the actors discuss why it was important to them to be a part of this groundbreaking version of •Les Misérables.
* Creating the Perfect Paris: Production designer Eve Stewart created a massive Paris set featuring real cobblestones and running water. Take an intricate look into the detailed recreation of these Paris streets that no longer exist in today's world.
* The Original Masterwork: Victor Hugo's Les Misérables: This mini-documentary takes a look at the historical backdrop and universal themes of Hugo's classic, and how the filmmakers mined the novel to enrich the look and feel of the film.
* Feature Commentary with Director Tom Hooper

SYNOPSIS
Hugh Jackman, Academy Award(R) winner Russell Crowe and Anne Hathaway star in this critically acclaimed adaptation of the epic musical phenomenon. Set against the backdrop of 19th-century France, Les Misérables tells the story of ex-prisoner Jean Valjean (Jackman), hunted for decades by the ruthless policeman Javert (Crowe), after he breaks parole. When Valjean agrees to care for factory worker Fantine's (Hathaway) young daughter, Cosette, their lives change forever. This enthralling story is a timeless testament to the survival of the human spirit and "an unforgettable experience" (Richard Roeper, RichardRoeper.com).